So one thing I noticed in zoya is that it flags weapons and defense revenue as not shariah compliant. Does someone know what is the justification aofi uses for saying these categories are not compliant?

Yeah just some clarification on the subject would be great. I am reaching out to local scholars to get their opinion on the issue but wonder if what is the app using for that.

ah just some clarification on the subject would be great. I a

This is an interesting topic.
(1) Firstly coming to AAOIFI guidelines only 3 specific industries are mentioned as non compliant

(2) In my understanding Tobacco is consider Makruh and not Haram. However, most screeners and investment funds rule out Tobacco

Discussion on this topic would be good. Everyone quotes AAOFI but AAOIFI does not give an exhaustive list that everyone puts up on their website.

Never understood why weapons/defense area is not considered halal. Every religion, culture, nation invests into it. It is needed by Muslim and non-Muslim nations alike. Being heavily armed can actually bring about peace.
I personally have no objection about investing in a defense company if they meet all the other requirements.

One of my friends who is a student of knowledge told me that his teachers taught him a mantra when approaching any matter:

“taqwa (ie. God-consciousness) before fatwa” (the designation of something being halal / haram).

There’s an authentic (sahih) hadith where the Prophet (PBUH) says,

Basically, when in doubt, stay out.

I believe the issue is more broadly not in investing in weapons per se. But in how they are used. Guns, just like kitchen knives, aren’t necessarily bad in and of themselves. It’s how they are used which is the point of controversary.

It’s not unlike investing in a drug manufacturing company. If you know that those drugs will be used to help people, that’s amazing, go for it if the financial screens are ok.
But if you know that company has a reputation / tendency to push those drugs onto drug dealers, then you would probably want to err on the side of caution of not investing in such a company as your investment may be doing society more harm than good.

Going back to the issue at hand, I believe it is investing in American (or other foreign companies) that manufacture weapons / technology for militaries, specifically militaries that have brought about overall harm to innocent people.

The U.S. military has such a track record. You can read more about that here.

The U.S. military too often fails to effectively investigate civilian deaths and injuries in its operations around the globe…Military investigators have dismissed or ignored important sources of evidence from outside the military, and risk missing vital information about their operations if they continue to do so, the groups said.

Every religion, culture, nation invests into it.

Most religions, cultures, and nations also invest in the alcoholic beverage industry. It doesn’t make it right.

The issue isn’t with having a military, but in what that military does. Investing in companies that enables a corrupt military is problematic.

And yes, this is ultimately a political discussion, but one that cannot be ignored when discussing weapons / defense stocks.

I would think that the defense for military stocks stems from missing out on good returns. I would go so far as to say that you don’t need the military in your portfolio. 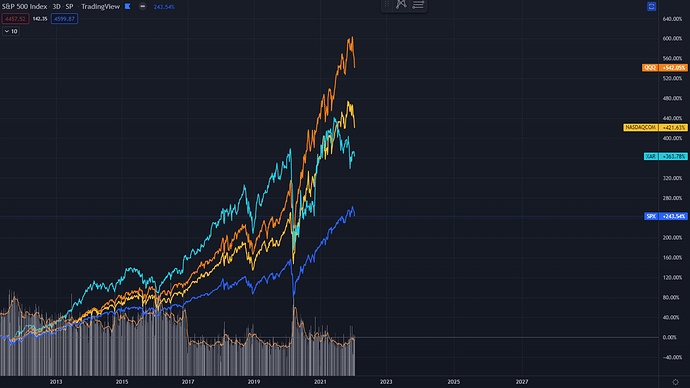 This is a chart showing the S&P500 (SPX), XAR (a top performing military / aerospace ETF), NASDAQ, and QQQ. This is as far back as the data goes for all of these. I did not conveniently select the timeframe to make a point.

“Verily, you will never leave anything for the sake of Allah Almighty but that Allah will replace it with something better.” - Musnad Ahmad 22565

May Allah give us the wisdom to invest what is best for both our societies and our pockets. May Allah bless you all!