Sh. @Joe covers it in more detail on his IG so be sure to check it out. In summary he outlines the following 5 criteria to look out for.

#1 - It is a store of value.
#2 - It is a medium of exchange.
#3 - Transparency about recourse.
#4 - Tokenomics are not ponzi-esque.
#5 - It has an established or projected, permissible real world use case. 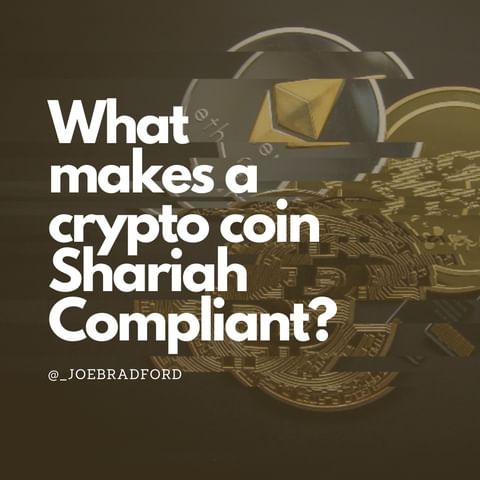 For those of you concerned with the Shariah compliance of the coins you are...

Love to hear from those who’re more interested in crypto, are these red flags common? Are they easy to spot?

When you buy crypto (not a stable coin), why are you buying it? You do not buy fiat currency, you earn it in exchange for labour.

Are you buying it in the hope it increases in value? If so, is this gambling given there is no resource being produced from crypto that can be used, rather like art you are hoping that someone pays more?

Sorry to add to the confusion. Alternate fatwa on Crypto by Taqi Usmani who chaired AAOFI 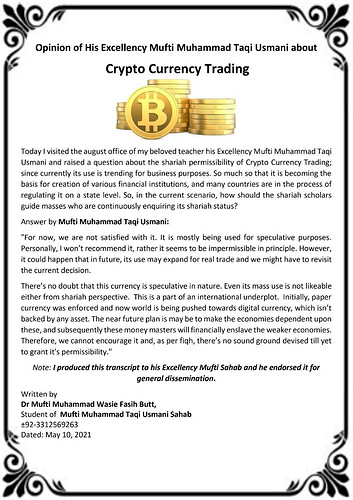 Maybe I’m not reading it proper, but I don’t feel like these are two mutually exclusive positions. Sh. Joe’s fifth point is regarding a real world use case. Indeed personally for me, just buying currency and hoping that it goes up never made any sense so I understand Mufti Usmani’s point.

Definitely looking forward to seeing more from our ulama as the technology grows and it’s use becomes more common.

At this point, I would simply say that if you have to think this hard about it, it is likely in a grey zone thus should be avoided.

There are those out there that do understand the blockchain and for them, it is a different question.

There are so many options out there to invest, why hurt your head trying to figure it out, find something simple both from an Islamic compliance point and an investable point.

One thing is we treat cryptocurrency like its crypto currency we don’t see the underlying project we ignore the actual thing which is BLOCKCHAIN with more creative people coming into defi we will see more real world projects like desci(open science), citydao(buying real world land plots through blockchain technology) funding science through blockchain (molecue.io)

the coins are actually shares of the projects
who doesn’t wanna invest in an exchange, lending/borrowing protocol especially if its automated executes transactions in secs when it takes a whole bank staff to do that task and if all these smart contracts are based on a blockchain lets say ethereum then why not invest in eth
If day trading is halal then why not take the opportunity of higher volatility

Regarding gold imo its not that hard rock we have seen crashing it many times in history and with the advent of derivatives, options trading you can see how much speculation is there too
640$ trillion in outstanding contracts with billions in gold as of 2019 when crypto market is mere 3$ trillion

“actually shares of the projects” Think of them as shares, not crypto.

Abdullah and I had a conversation on DAO and what investing looks like in them. At this point, I can say that Web 3.0 is in its infancy, much like the internet before (remember dial-up and pings and chat boards) the advent of the www which made it accessible to a broader audience.

If there is anyone else that is has a depth of knowledge of DAO and how to evaluate them please reach out, we would love to chat and create a think tank to share learnings at the Halal Investing Club (which by the way has its first meeting tonight at 8:30pm EST Halal Investing Club
Wednesday, 17 November · 8:30 – 9:30pm
Google Meet joining info
Video call link: https://meet.google.com/gdh-ackw-ieq

which is BLOCKCHAIN with more creative people coming into defi we will see more real world projects like desci(open science), city

I think there’s an important nuance re Sh. Joe’s fifth point that it has an established or projected, permissible (real-world) use case. This especially applies to meme coins.

The thing about many meme coins, is that they often don’t have an initial use case. They are literally jokes or memes, so it’s purely speculative. The building of an NFT marketplace or currency swap, or whatever they are trying to ultimately become, comes after the virality / raising of enough funds.

Any investment ultimately has at least some amount of speculation, but as an investment becomes increasingly more speculative and not grounded in fundamentals (ie. use case), then those increasingly become more solid grounds for impermissibility imo, or at the very least grey as @hkirefu mentioned.

Great to have you here @Darrel_Lychee